Evolving news on the science, writing and thinking about Near Death Experiences (NDEs)

I am in the process of working on a review of the literature on evidence against NDEs being a genuine out of body phenomenon. The key piece of evidence relates to reports of brain activity after the heart has stopped. There have been reports in rats up to 30 seconds after death, and also in some human studies, but for now I want to highlight the reality of mainstream media reporting on this topic, and how utterly dishonest it can be.

Further down is a quote from the Independent newspaper in the UK discussing a 2017 publication by a group of Canadians that was discussed briefly in the comments section of my last post (Alan mentioned a Newsweek article that cited the same original piece of research). The background is that four patients on an ICU had life support withdrawn and their brain activity was monitored closely before and after cardiac arrest. One of the patients showed some delta wave EEG activity up to thirty minutes after the heart had stopped supplying oxygenated blood to the brain. (Delta wave NREM sleep is not associated with dreaming or conscious sleep, but rather is the deep sleep when the body is repairing itself). Here is the EEG data showing the anomaly: 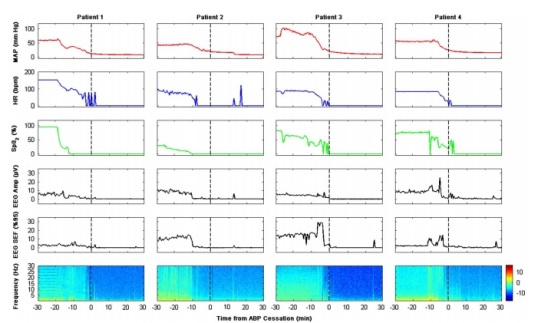 It is notable that the signals are extremely low in intensity after “death” (the dashed line), and therefore even if they are real, are extremely unlikely to signify “conscious” neuronal activity of the type that would be required to generate complex NDEs and store the information. However, our delightful media have a different take:

“But tests showed that the patients’ brain appeared to keep working ”

“The doctors don’t know what the purpose of the activity might be, and caution against drawing too many conclusions from such a small sample. But they write that it is difficult to think the activity was the result of a mistake, given that all of the equipment appeared to be working fine.”  Link to article

What was actually said in the publication:

“An unexpected finding in the current work was that single bursts of delta wave activity persisted following ECG and ABP cessation for one patient. It is difficult to posit a physiological basis for this EEG activity given that it occurs after a prolonged loss of circulation. These waveform bursts could, therefore, be artefactual in nature, although an artefactual source could not be identified.”

And in the discussion section:

“Finally, we also encountered one case where EEG activity persisted beyond the cessation of ABP. Given that this was only observed in one case and it persisted well beyond the loss of circulation, we speculate that this activity could reflect a nonneuronal artefact.”

The inference in the Independent is that this “unexplained” activity invites speculation that the brain is up to something after death, adding credence to the meme that NDEs are a natural phenomenon, however the actual publication suggests it is most likely an artifact. Most people don’t bother reading the original piece of research, so will finish this media article concluding that brain activity occurs long after death, and thereby possibly dismissing NDEs as having natural explanations.

Anyway, as mentioned I am going to do a review of current literature on this topic and provide a summary. I will also be looking to shed more light on the difference between death of brain activity and permanent cellular death. Please feel free to make suggestions for appropriate articles in a comment (Please note, if you are posting a comment for the first time on this blog it will not appear immediately to avoid SPAM, trolling and BOTs. Due to my workload, it may be a day or two before I review it.)